Terreform ONE designs a one-of-a-kind monarch habitat filled with milkweed that would serve as a way station for migrating butterflies to support the population.

Residents at a new eight-story building planned for Manhattan's Nolita neighborhood will one day be able to look out into a terrarium attached to a wall and see a breeding ground for monarch butterflies. This is all thanks to The Monarch Sanctuary—a building system and façade, which doubles as a "vertical butterfly meadow," that can be retrofitted to existing buildings in urban environments.

Once completed in the nearest future, the street façade will cover the entire eight stories of the new building, which is still going through the approvals process. Presently, a 15-foot prototype of the architectural firm's sanctuary is on display at the Cooper Hewitt, Smithsonian Design Museum in New York. 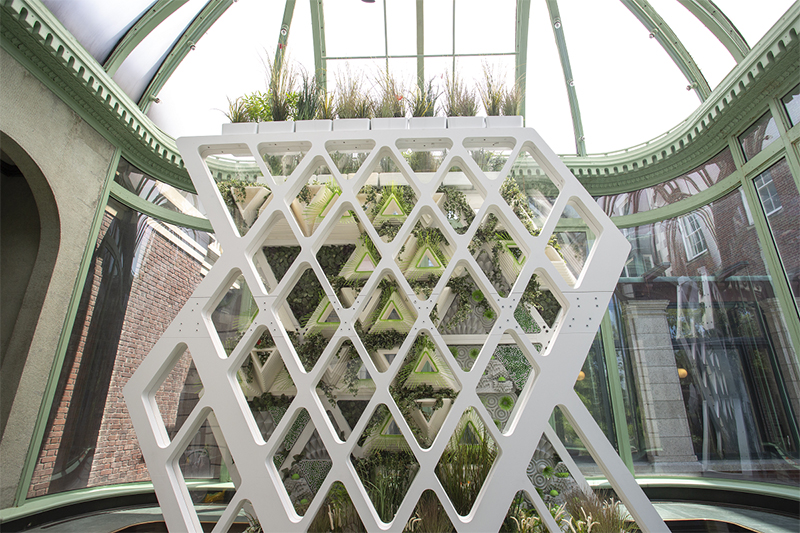 The 15-foot prototype of the monarch butterfly sanctuary is currently on display at the Cooper Hewitt, Smithsonian Design Museum in New York City.

Terreform ONE, a Brooklyn-based non-profit design and architectural firm, unveiled the prototype of the Monarch Sanctuary as a part of 62 unique designs chosen for the museum's Triennial exhibition. This year's design is themed Nature and explores architecture's response to critical issues surrounding climate and the environment. Matilda McQuaid, Deputy Curatorial Director of the museum, described the exhibition as "a call to action" that highlights the power of design to change the world and of designers to tackle environmental factors that impact humanity.

"It's very similar to a green wall," said Mitch Joachim, Ph.D., architect, Fulbright Scholar and Terreform One co-founder. "But green walls are really just for air quality and aesthetics. This green wall has another layer, another purpose, which is to really support other life forms."

Terreform ONE—the urban think tank that advances ecological design in derelict municipal areas—set out to combat the decline of the monarch butterflies through pioneering designs intended to enhance urban space with habitats that convey possibilities for a new biodiverse environment.

"We decided to find a deeper, more visceral, more meaningful mission," Joachim added, a mission that aimed to create structures in urban environments "that build in biodiversity, that care about something else besides human or anthropocentric concerns."

The architectural team researched designs that would be conducive to bolstering the monarch population and set out to "build a habitat that would support their lives going from larvae to chrysalis to adult butterflies who lay eggs and reset that whole cycle, and using it as a way station so that they can move from points like this to other points and get a chance to have their population restored," added Joachim. The design also had to involve milkweed, which the monarch relies on as both a habitat in which to lay its eggs and the sole food source for its larvae, as well as a nectar source on which the mature butterflies can feed.

To build a prototype that is as functional as it is visually compelling, Terreform ONE turned to BASF, which sponsored the project.

"First, we agreed upon the design intent and specifications for the material: the formulation needed to be lightweight, white-colored, extremely flowable and raise the bar on its sustainability characteristics," said Vivian Kuan, Terreform ONE's Executive Director. "BASF rose to the challenge, taking our designs and then figuring out how to achieve our mutual goals."

After the architectural firm created 3D-printed silicon molds of the structure's foundation, BASF's Master Builders Solutions team in Beachwood, Ohio, led by Lesley Suz-Chung Ko, Ph.D., took over producing a specialty mortar mixture to fill the unique design—a diagrid—a series of paned diamond shapes constructed from interlocking beams and reminiscent of a honeycomb. The diagrid is energy efficient, explained Nicholas Gervasi, one of the project's architects, in that it requires less building material than would a more traditional structure. This, in turn, makes it lightweight and transportable. It is light in color to minimize the amount of direct sunlight absorbed. Another sustainability aspect of the materials was replacing a portion of the cement with alternative materials to reduce the carbon footprint. 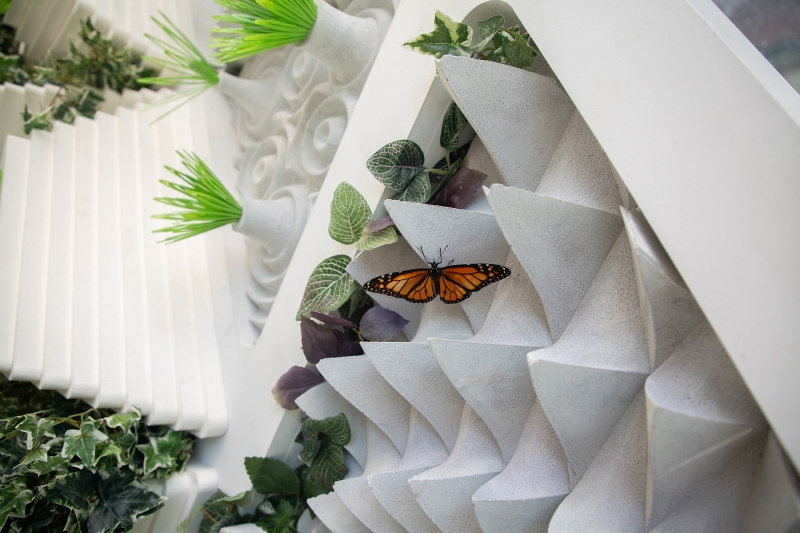 Upon the creation of 3D-printed silicon molds of the structure’s foundation by Terreform ONE, BASF’s Master Builders Solutions team took over producing a specialty mortar mixture to fill the unique design—a diagrid—a series of paned diamond shapes constructed from interlocking beams and reminiscent of a honeycomb.

"Due to the intricacy of the design, [we] had to develop a mortar that was highly flowable, almost like water when it moves so that it would flow into the crevices and actually replicate the design itself," said Sandra Sprouts, a senior research scientist with BASF.

BASF made a sensible partner on this project due to its investment in the plight of monarch butterflies since 2015, launching the Living Acres Monarch Butterfly Challenge, a program for farm families, golf courses and other landowners to enhance their local biodiversity by planting milkweed—provided by the company—in an effort to increase habitat along the monarch's migration route—north from their winter homes in Mexico through North America before making their way back to Mexico.

To design the details of the sanctuary, Joachim and the Terreform ONE team observed live butterflies inside their test lab to see to what sorts of external stimuli they reacted. Monarchs, as a cold-blooded animal, have an affinity for sunlight and diversity in landscape, and so Terreform ONE came up with the aesthetically pleasing façade with seasonal vents that can be opened as needed. Several artificial flora are used in the interior. The only natural substance present in the exhibit—is milkweed.

"The design became a vertical mosaic with different kinds of [artificial] plant forms that butterflies have different purposes for," Joachim added. "Butterflies are attracted to moisture sources, so we designed these features for them such as a butterfly mud bath. They love feeding on these sponges, so we created a concrete system that allowed these sponges to be easily maintained and [to] constantly receive nutrients." The sponges can be refilled with sugar water to simulate the nectar that is the main food source for the monarch.

When this structure is imminently built to scale and affixed to a building in New York City—implausible though it may seem in an urban environment—there is a chance that monarchs might find its way there. After all, New York is part of the monarchs' migratory path, and therefore an obvious choice.

With milkweed crucial to the monarch butterfly population, there is plenty that the individual, too, can do to aid in the cause. While city dwellers might not have much influence over outdoor space, those in the suburbs and more rural areas, even with a very small plot of land—can help.

"By providing a habitat, by incorporating milkweed into your gardens, you're providing a forage area for monarch butterfly larvae," added Shilling.

"Devote an area of your land to just allow milkweed to grow," Joachim concluded. "Be a little more diverse if not in your front yard than your backyard. Allow things to go fallow—any American can do that. You don't need an elite group of architects."

Meanwhile, thanks to art, design and chemistry intersecting in one project—a community will soon be able to look out their windows and see a garden of butterflies—which will not only serve as a haven for the monarchs, but also benefit humans who live and work in and around the building.

The Monarch Sanctuary is on display at the Cooper Hewitt Smithsonian Design Museum, located at 2 East 91st St. at Fifth Avenue in New York City, until January 2020.

You've come to a page that doesn't currently exist or followed a link to a page that we've removed. If you entered a web address please check it was correct.

Go to the Insights Homepage