A BASF study that looks at a new high-performance, APEO- and zinc-free binder with improved corrosion protection.

Written by Tony Neely for BASF Corporation, Dispersions and Resins

Waterborne technologies are gaining ground, although solventborne or 100% solids technologies remain dominant, for corrosion protection due to increased regulations around VOC emissions. Our latest development emphasizes our commitment and expertise in this field.

This study demonstrates a high-performance, APEO- and zinc-free binder with improved corrosion protection compared to other 1-component waterborne binders of equivalent dry film thickness. This new resin helps to save formulation cost and complexity by decreasing or eliminating the use of active inhibitors. The versatility of this technology will be showcased by results in a high-gloss direct-to-metal (DTM) coating and primer. By balancing the hydrophobicity and chemical functionality, BASF has developed a resin with low water uptake, good early water and humidity resistance, and excellent corrosion resistance while still allowing for ease of formulation and pigment dispersion. This functionality also allows for superior adhesion to multiple substrates, including plastics.

For coatings scientists, solvents can provide numerous benefits. They are simple and quickly reduce viscosities for ease of application of protective coatings. The viscosity of the system needs to be adjusted between 50-200 millipascal second (20-60 seconds with Dyn 4 viscosity cup) to ensure good application and spray-ability. However, due to increased regulations against VOC emissions, these same solvents can create a dilemma. In the USA, the state of California demands a restricting 100 g/l VOC which can be extremely challenging to achieve without the use of exempt solvents. Although the VOC regulations are somewhat regional, global companies often must work with the most stringent threshold when developing products for the global market. In order to solve the solvent dilemma, scientists look to waterborne technologies since dispersions generally afford a lower viscosity compared to solutions. Although solventborne or 100% solids technologies remain dominant for corrosion protection, waterborne technologies are gaining ground. This gap in the market is due to an actual and sometimes only perceived gap in performance between them. The goal then is to develop waterborne binders that can perform similarly to solvent systems.

In the general industrial market, waterborne direct to metal (DTM) products have gained significant ground. To define this space, we use the ISO 12944-2 standard of C1-C3 environments or light to medium duty applications. (A DTM product is a true 1-layer solution with no primer or topcoat. Therefore, we will not consider C4-C5 moving forward as these applications employ multicoat systems.) Within this market in North America, customers are demanding even lower VOC coatings with thinner film builds (and/or fewer layers) and increased corrosion, chemical, and weather resistance. This brings about reduced cost in materials and labor as well as increased throughput. However, this also demands significant challenges from the scientist developing the coating. In order to aid this development, we have developed a waterborne DTM resin with improved corrosion protection compared to other 1-component binders of equivalent dry film thickness (DFT). In the proceeding pages we will describe work done to benchmark this binder against competitive resins targeted at the general industrial DTM market.

Seven competitive resins that are capable of 100 g/L or less were used for comparison. These plus our resin were put through two rounds of performance testing on unpolished, cold rolled steel (CRS) and aluminum panels. The resin prototype is a styrene-acrylic dispersion at 50% solids by weight with a viscosity of 300 – 1000 mPa-s, pH of ~7 and minimum film forming temperature (MFFT) of ~19 °C.

In round two, block, hardness, flexibility, and weathering data were evaluated. Block resistance was evaluated using ASTM D4946. Hardness was assessed via pendulum swings according to ASTM D4366. Flexibility was evaluated according to a mandrel bend test and ASTM D522. For accelerated weathering data, duplicate panels were exposed to continuous QUV and 60° gloss retention compared. 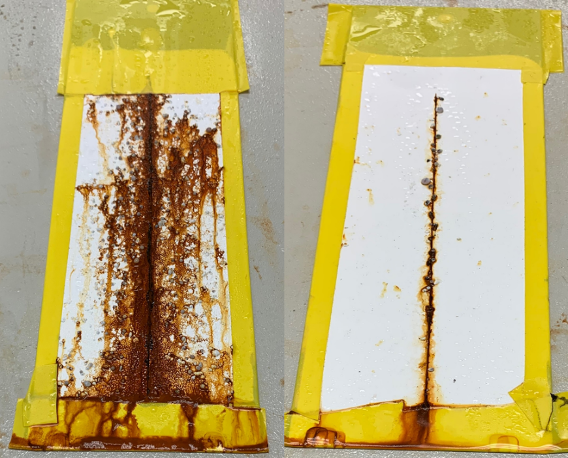 Figure 1: Corrosion testing of our prototype in two separate formulations. Panel A was exposed 235 hours while Panel B 378 hours

Dry and wet adhesion testing was performed on both CRS and aluminum panels. 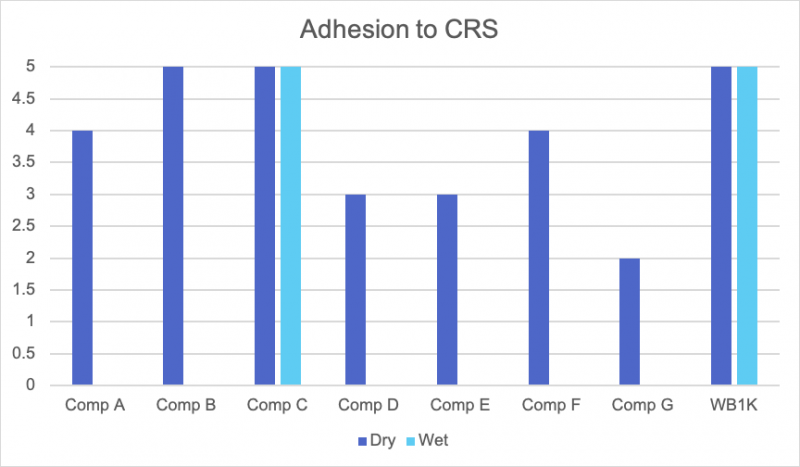 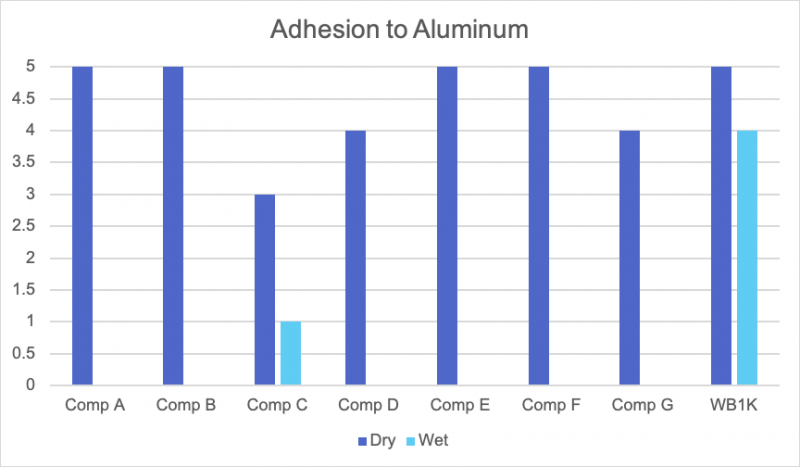 As can be seen from the chart above to the left, while CRS is a major target substrate for DTM applications wet adhesion is lacking in many of the competitive resins.

Once again, we see the best dry and wet adhesion from our waterborne 1K resin.

In the industrial space, protective coatings are exposed to various solvents which can degrade the coating leaving the surface exposed to the surrounding environment and drastically affect performance. In the chart below, nine chemicals were spot tested and then evaluated according to ASTM D1308. 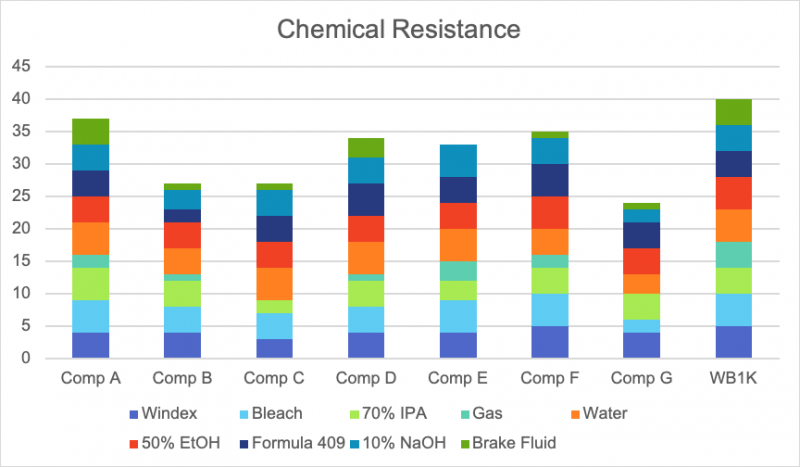 With a rating of 0-5 for each of the nine chemicals tested, the highest score available is 45. Our waterborne DTM resin has the highest chemical resistance when compared to the competitive resins.

In our humidity chamber testing of both aluminum and CRS panels, four of our competitive resins had medium to medium dense size 6-8 blisters.

Figure 5: Competitive resin A after 250 hours of humidity exposure 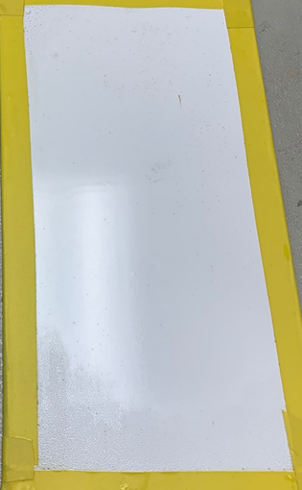 As the main performance metric for a DTM coating, corrosion resistance is the most important testing criteria. For some resins, however, we saw surface blistering and rust as well as scribe creep after only 48 hours exposure.

Because of this result, it was decided that not all the competitive resins would undergo round two testing. The top performers in salt spray testing (SST) are highlighted in Figure 8 below. 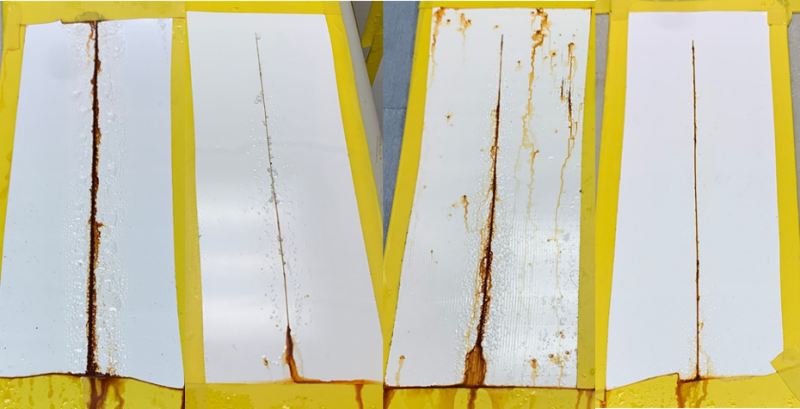 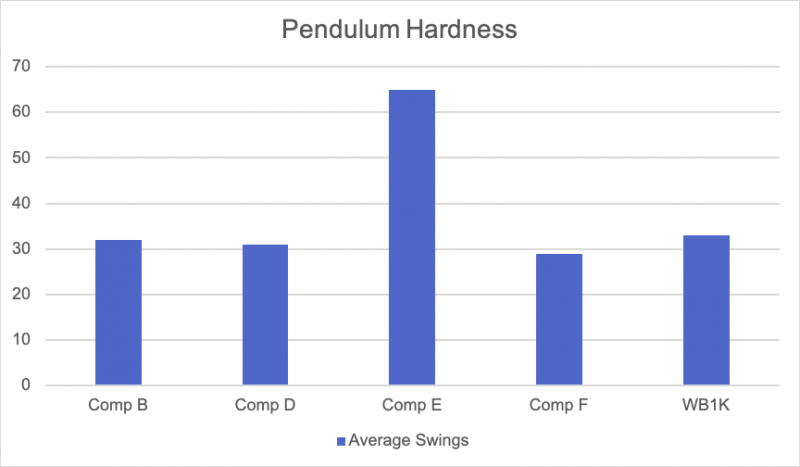 In round two, we observed one aspect of film performance - hardness. If a film is too soft, this can lead to scratches that penetrate to the bare substrate leading to corrosion. In our pendulum hardness test, our waterborne prototype averages a similar number of swings when compared to most of the competitive resins. However, one resin did result in almost double the swings. 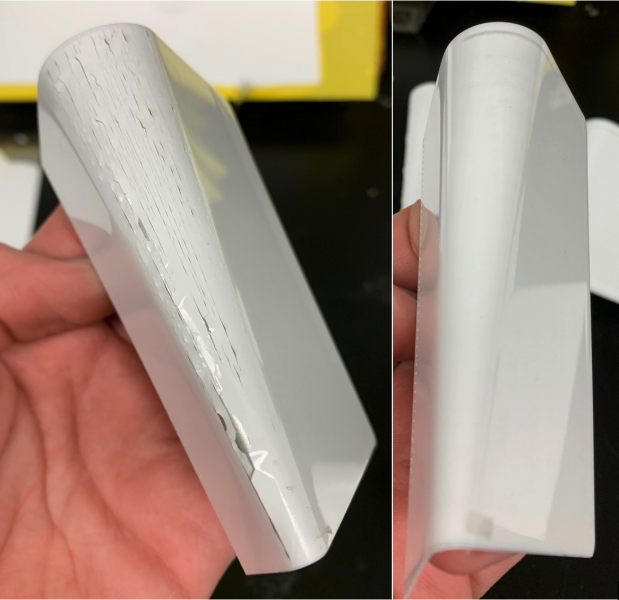 Figure 10: Example of hard (69 swings) but brittle coating beside our prototype

While hardness can be a direct indicator of performance in the field, if the resin is too hard it can become brittle. An example of this can be seen below in Figure 10. This example resin achieves 69 swings in our pendulum testing, however, completely cracks under the mandrel bend test. Our prototype showed no signs of cracking across the bend. 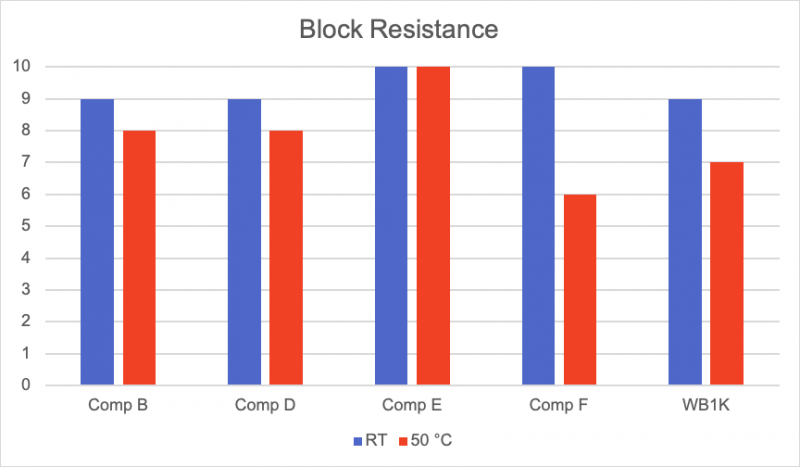 In manufacturing, block resistance can become critical as coated parts are stacked. Having to keep parts separate and allow them to cool before stacking can greatly decrease throughput. To test the performance of the resin selection, a 1 Kg weight was placed atop two panels with their coated side facing. This was left for 30 minutes and then pulled apart and evaluated according to ASTM D4946. The same testing and evaluation were then performed after leaving the weighted panels in a 50 °C oven for 30 minutes.

While block resistance at room temperature can be achieved, once the temperature reaches above the glass transition temperature of the resin it can more difficult. Competitive resin E being the hardest of the group, and therefore most likely having the highest Tg, came out ahead. 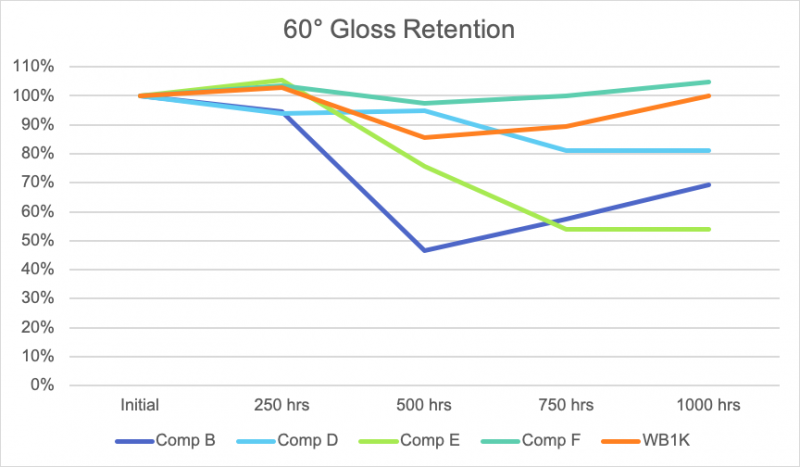 As DTM coatings are expected to be a one-coat system, they must be able to withstand UV exposure without fading and with no topcoat. However, an all-acrylic system can be more expensive than their styrenated counterparts. Although our resin does contain styrene, it performs extremely well in our QUV accelerated weathering

After 1000 hours of QUV exposure, our resin prototype is one of the top performers in gloss retention.

In this paper, we have identified several key performance metrics for modern, low VOC DTM resins. Although corrosion resistance is still considered the most important, others can be just as critical if the coating is expected to withstand the stringent demands of customers. Our new waterborne resin is a top performer against those in the market in corrosion and humidity resistance. However, it also gave the best overall adhesion and chemical resistance with great UV resistance. This overall product performance is able to perform in a wide range of applications and can be used as a true one-coat solution for metal protection. 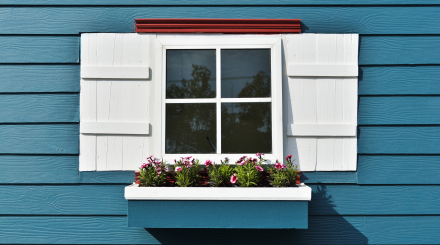 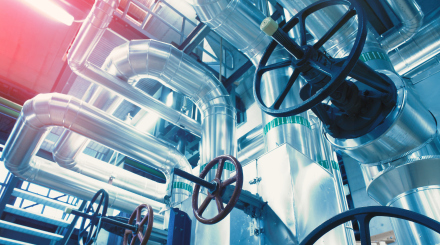 June 6, 2018 Paints & Coatings Q&A: Primed for success, without the primer 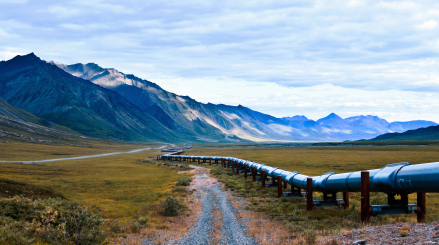