As corporate citizens, it is important for us to do our part towards sustainable practices. We all understand the platform we have in professional sports. We have the opportunity to lead by example and be change agents in this industry

It takes a village to make a compostable peanut bag. To be precise, it took the collaboration of four companies — BASF, Hampton Farms, Aramark and the Kansas City Chiefs — to make it happen.

It all started with the professional football team. As an initiative to implement additional sustainability efforts at Arrowhead Stadium, Brandon Hamilton, Kansas City Chiefs Vice President of Stadium Operations, knew a compostable peanut package would get the stadium one step closer towards the Chiefs’ environmental initiative called Extra Yard for the Environment.

“As corporate citizens, it is important for us to do our part towards sustainable practices. We all understand the platform we have in professional sports. We have the opportunity to lead by example and be change agents in this industry,” Hamilton tells BASF in an exclusive interview. “In looking at our diversion process, there are a couple of obstacles in the way of reaching higher numbers; some items that our concessionaires sell are either not compostable or not recyclable, and the peanut bag is an example of that.”

The trend towards waste reduction is not a new one. About 32 million pounds of food waste are diverted annually, according to Missouri Organic Recycling, the local Kansas City composter, which is enough to fill a 1-foot-deep football field 15 times.

Most sports venues today have some sort of recycling or composting programs in place. Providing separate collection bins for fans to dispose their waste is a start, but the real benefit comes from diverting waste from landfills. Hamilton wanted to be the first. Part of his waste diversion plan was to come up with compostable peanut bags or stop selling them at the stadium altogether. 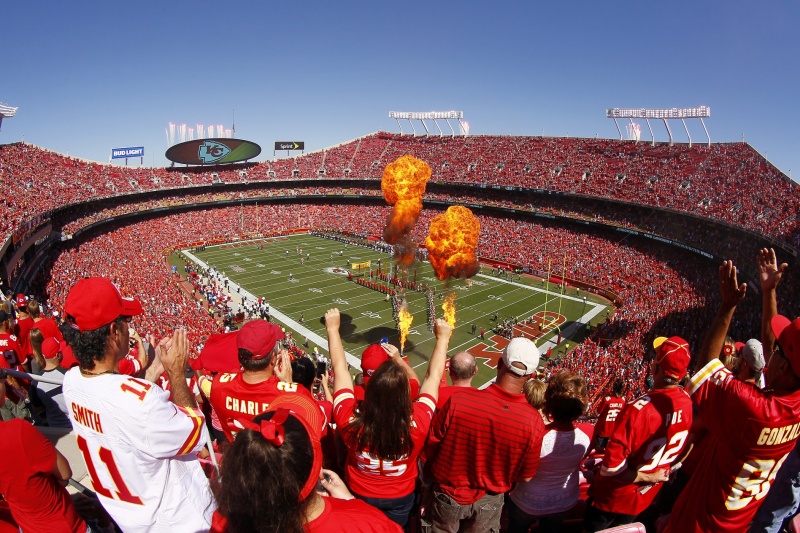 Hamilton’s plan came closer to reality in 2013, when he attended the Green Sports Alliance Summit in Brooklyn, New York. He heard a BASF employee speak about developing and producing a concept compostable peanut bag demonstration for a promotional activity.

The Chiefs team was impressed and asked its food provider, Aramark, to approach the German chemical company about making the same for the Arrowhead Stadium. Two BASF materials were used to make the compostable peanut bag, along with a compostable barrier film from Futamura Group. The heat-seal layer was made from BASF’s certified compostable biopolymer, ecovio, and Epotal ECO, a compostable water-based adhesive used to laminate the two plies.

Individual materials can be certified compostable, but it is the end product that makes the impact on the environment. The project involved an 18-month process to ensure the right products were combined in the optimum way for regional environmental conditions.

“In order for us to claim that something is industrially compostable, there are performance standards that a finished package must meet,” says chemist Tom Pitzi, Manager, Biopolymers North America at BASF, who was involved in the project.

Once the final construction of the bag was complete, the peanut supplier, Hampton Farms, packaged the peanuts and sent them to Aramark. The concessionaire then, in turn, debuted 15,000 of these bags at Arrowhead Stadium on Nov. 26 during the Chiefs’ game against the Buffalo Bills. 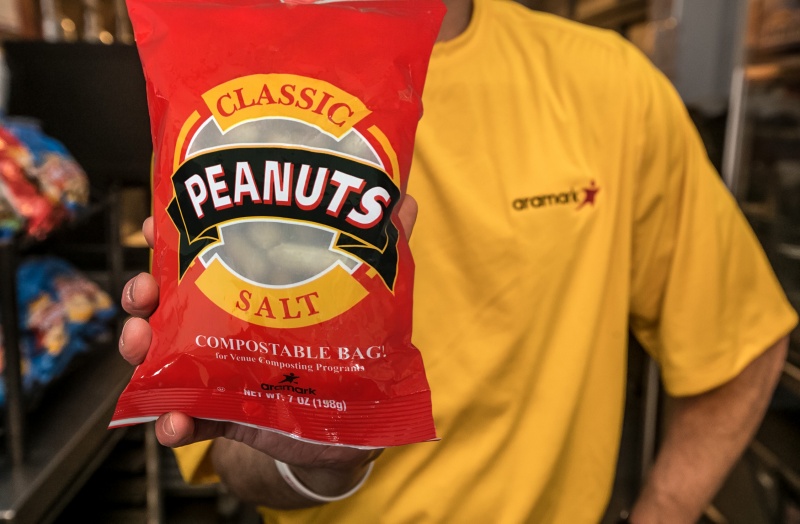 Peanuts in these compostable bags were sold throughout general concessions and in-seat vending, with the goal of expanding to other areas of the stadium following the pilot phase.

The new compostable peanut bag is replacing the standard laminated polypropylene peanut bag that is currently available at stadiums. The bright red bag won a Gold Award for Sustainability by the Flexible Packaging Association. The pouch contains printed verbiage to help consumers understand that it is compostable as part of the venue’s composting program.

“I think it’s great for the consumer, because for them, it’s really going to be seamless,” Hamilton adds. “This will give a level of value to consumers in our facility who are sustainably conscientious.”

Now that Arrowhead has debuted the environmentally friendly bags, there is no turning back for the stadium; and all those involved say it’s a matter of time before other venues will follow suit.

“Packaging and waste management is a focus. The market space for compostable plastic has expanded to food service items over the last few years; this is just the beginning,” adds Pitzi. “We expect to see new innovations over the next five years within the packaging segment, whether it’s flexible packaging or rigid packaging.”