Reebok and BASF collaborate on latest innovation that is changing footwear creation.

As more manufacturers bring production back to the U.S., in an effort to cut costs and move closer to their customers, Reebok and BASF are following suit with their latest shoe partnership.

The global athletic footwear company and the leading chemical company have teamed up on Reebok’s latest innovation—the Liquid Factory, which could change the process and speed of footwear creation.

Developed by the Reebok Future team, the Liquid Factory uses modern software and robotics to draw shoes in three dimensions. This new technique utilizes 3D drawing, where proprietary liquid material—created especially for Reebok by BASF—is used to draw shoe componentry cleanly and in 3D layers (see video below). What makes this layering technique unique is that it doesn’t have to use traditional molds, which are expensive, time-consuming and heavily dependent on labor. Due to the current mold-driven process, almost all athletic footwear is made in Asian factories. With this new liquid process, a machine can draw the components of a Reebok shoe anywhere, including Rhode Island where the Liquid Factory is located. 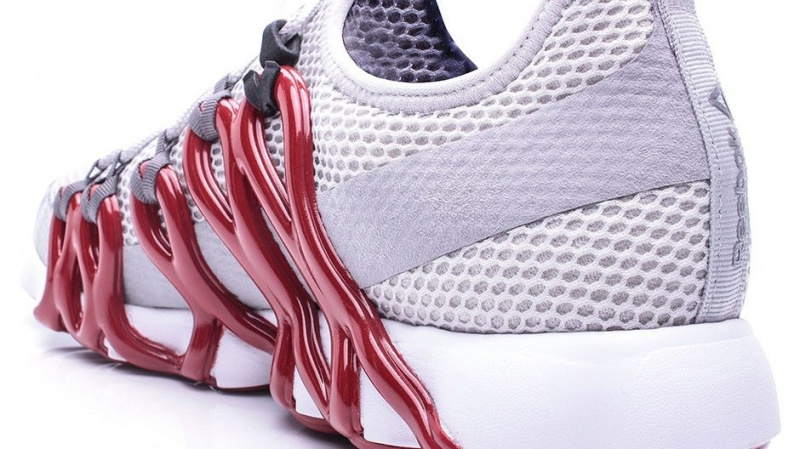 The Liquid Speed shoe is made with 3D drawing that supersedes the need for molds. (Photos courtesy of Reebok)

“The point of automation is to shorten the production cost and enable that automation. So instead of a person sitting there and putting a sole on, they were able to dispense it in 3D on the part itself— that saved a lot of time,” said Chau Nguyen, Market Segment Manager for Footwear, PM North America, BASF, who’s worked closely on this product.

Reebok, which collaborated with BASF earlier on another innovation—a first by the chemical company—TPU tubes inside the Harmony Road shoe, approached the German chemical giant about a need for a polyurethane (PU) system with unique properties that could not be found in the market. BASF, being a technology leader in the world of PU chemistry was quick to help.

The chemical company developed a urethane-based liquid to help eliminate molds. That liquid is then drawn on the entire shoe as the outsole, resulting in a three-dimensional fit. This creates the Reebok Liquid Speed shoe, the first concept to come out of this process. 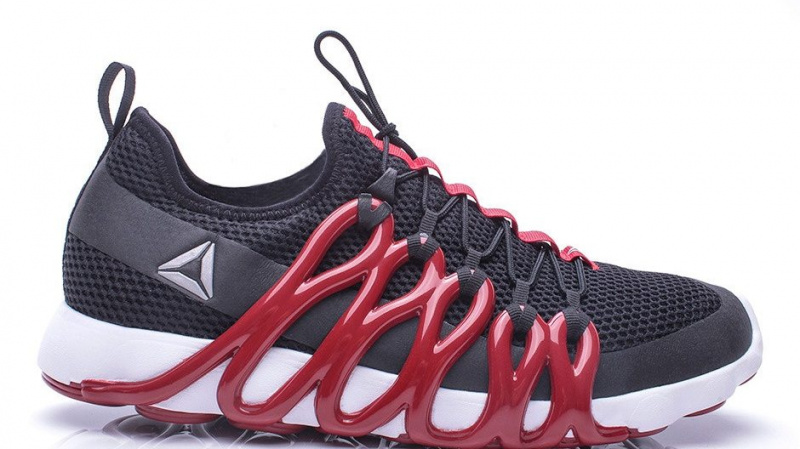 “We provide the material to Reebok that has the required rheology and reactivity to produce a part with no molds,” said Nguyen. “Look at it as if drawing with ketchup. When you draw with this material, it’s already curing, it’s already started to solidify.”

“We were certainly aware of BASF's stellar reputation for creating chemistry solutions in general, but what really appealed to us was the way the team attacked creating the appropriate chemistry for a brand-new application in our industry,” Bill McInnis, Head of Future at Reebok, told BASF in an interview. “We knew what we wanted and BASF quickly figured out the best path to get there.”

And in addition to efficiency, this shoe also provides better comfort.

“In this case the outsole has wings on it and it wraps around to the sides of the shoe. You have tension at the top of your foot, and usually all of the materials are combined together,” Nguyen added. “Well, in this case you have material attached to the sides, the medial and the lateral parts of your foot, so you get a more custom fit.”

Liquid Speed is an energy-return focused running shoe that brings the outsole and lacing together in one piece for a comprehensive feel and sensory feedback for the entire foot, per Reebok. The shoe was released with a limited edition of 300 pairs in November 2016 that were sold out online within hours for $189.50 each.

McInnis said only 300 pairs were initially made because Reebok was borrowing lab time for the first batch. Now that the company had its own Liquid Factory built in Rhode Island, there will be more in the pipeline.

We knew what we wanted and BASF quickly figured out the best path to get there.

Head of Future at Reebok

According to Nguyen, this is the first ever high-rebound outsole, since up until this point a lot of outsole materials have been made of rubber.

“When you’re running, a certain amount of energy is going to the ground. So, when you hit the ground, in this case, it absorbs the energy and then it returns it, that’s why it’s called high rebound,” he added.

In addition to footwear disruption, it looks like the two innovation giants are on the right track in terms of production as well. Active reshoring is on the upward trajectory. Per a BCG survey of 263 U.S. manufacturing executives last year, 17 percent of manufacturers are moving operations back to the U.S., up from 13 percent in 2013. Additionally, U.S. has surpassed China as the most likely destination for new factory capacity for goods sold in the U.S.

And the future of footwear innovation certainly looks bright for BASF. Reebok is working on further platforms this year, and BASF is supplying the material for them again.

“The various chemistries provided by BASF—we have separate chemistries for cushioning, durability and support— are central to these creations,” McInnis added.